Please join us to celebrate the publication of Beatrice de Graaf's book, Fighting Fighting Terror after Napoleon: How Europe Became Secure after 1815, hot off the presses from Cambridge University Press. The author will provide an over view of her work and be available for a Q&A. Bring a beverage and snack for this first-ever GSA Virtual Book Launch!

Information: After twenty-six years of unprecedented revolutionary upheavals and endless fighting, the victorious powers craved stability after Napoleon's defeat in 1815. With the threat of war and revolutionary terror still looming large, the coalition launched an unprecedented experiment to re-establish European security. With over one million troops remaining in France, they established the Allied Council to mitigate the threat of war and terror and to design and consolidate a system of deterrence. The Council transformed the norm of interstate relations into the first, modern system of collective security in Europe. Drawing on the records of the Council and the correspondence of key figures such as Metternich, Castlereagh, Wellington and Alexander I, Beatrice de Graaf tells the story of Europe's transition from concluding a war to consolidating a new order. She reveals how, long before commercial interest and economic considerations on scale and productivity dictated and inspired the project of European integration, the common denominator behind this first impulse for a unification of Europe in norms and institutions was the collective fight against terror. 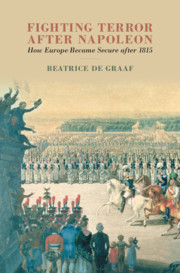